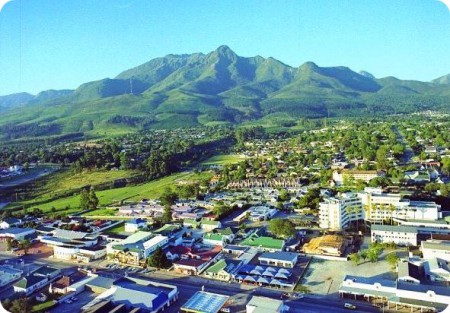 Welcome to George, the sixth oldest town in South Africa and the largest along the Garden Route!

Centrally situated halfway between Cape Town and Port Elizabeth, George is a popular holiday and conference center, also the administrative and commercial hub of the Garden Route.

With the majestic Outeniqua Mountains to the north and Indian Ocean to the South, it’s also known as the “The Gateway to the Garden Route”.

George has much to offer the visitor with its city-like infrastructure but not forgetting its small town roots.

Being 8 km inland, the beaches of Victoria Bay and Herold’s Bay are within a few minutes’ drive.

Many historical landmarks are worthy of a visit, including The Slave Tree – an ancient English Oak planted by Landdrost (magistrate) van Kervel in 1811. With a large chain and lock embedded in the trunk, it’s has been declared a national monument.

George is a mecca for golfers, with some championship courses on its doorstep. The main attraction of golfing in George is the natural beauty you’re surrounded by, enhanced by lavish flora and the backdrop of the Outeniqua range. 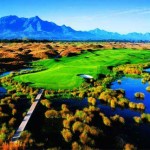 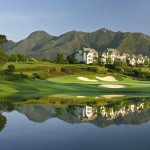 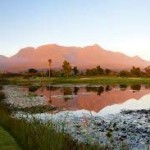 The Garden Route Mall, with it’s variety of shops, restaurants and cinema are a few minutes drive out of town.

Getting There (approximate figures)

George is 420 km east of Cape Town along the N2 national road and 330 km west of Port Elizabeth. The airport, 7 km from the city center, has scheduled flights to Cape Town, Durban and Johannesburg International Airports.

Click here for all listed accommodation in George and the nearby vicinity.